To answer this question the afibber should engage in a lengthy discussion with his/her health-care provider which results in a shared and informed  decision. Such discussion must cover your risk of stroke, the benefits of blood thinners in preventing stroke, the bleeding risks of blood thinners and the pros and cons of the five oral anticoagulants available to prevent stroke.

Estimating Your Risk of Stroke With Afib 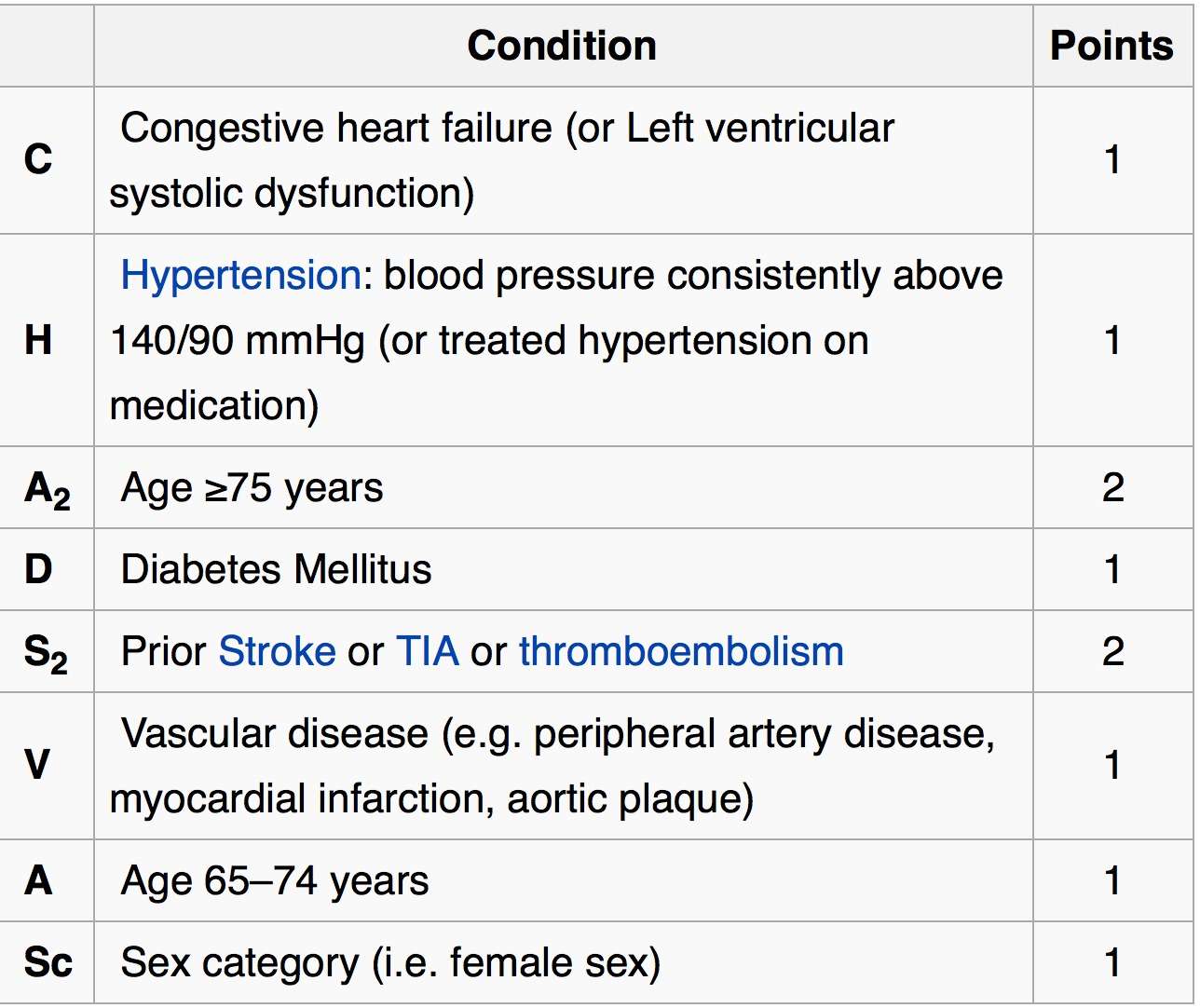 This scale take the factors we know that increase the risk of stroke and assigns 1 or 2 points. The acronym comes from the first letter of the factors that are known to increase risk as listed to the left.

We then add up your points and use another chart (or app) to calculate the risk of stroke per year. 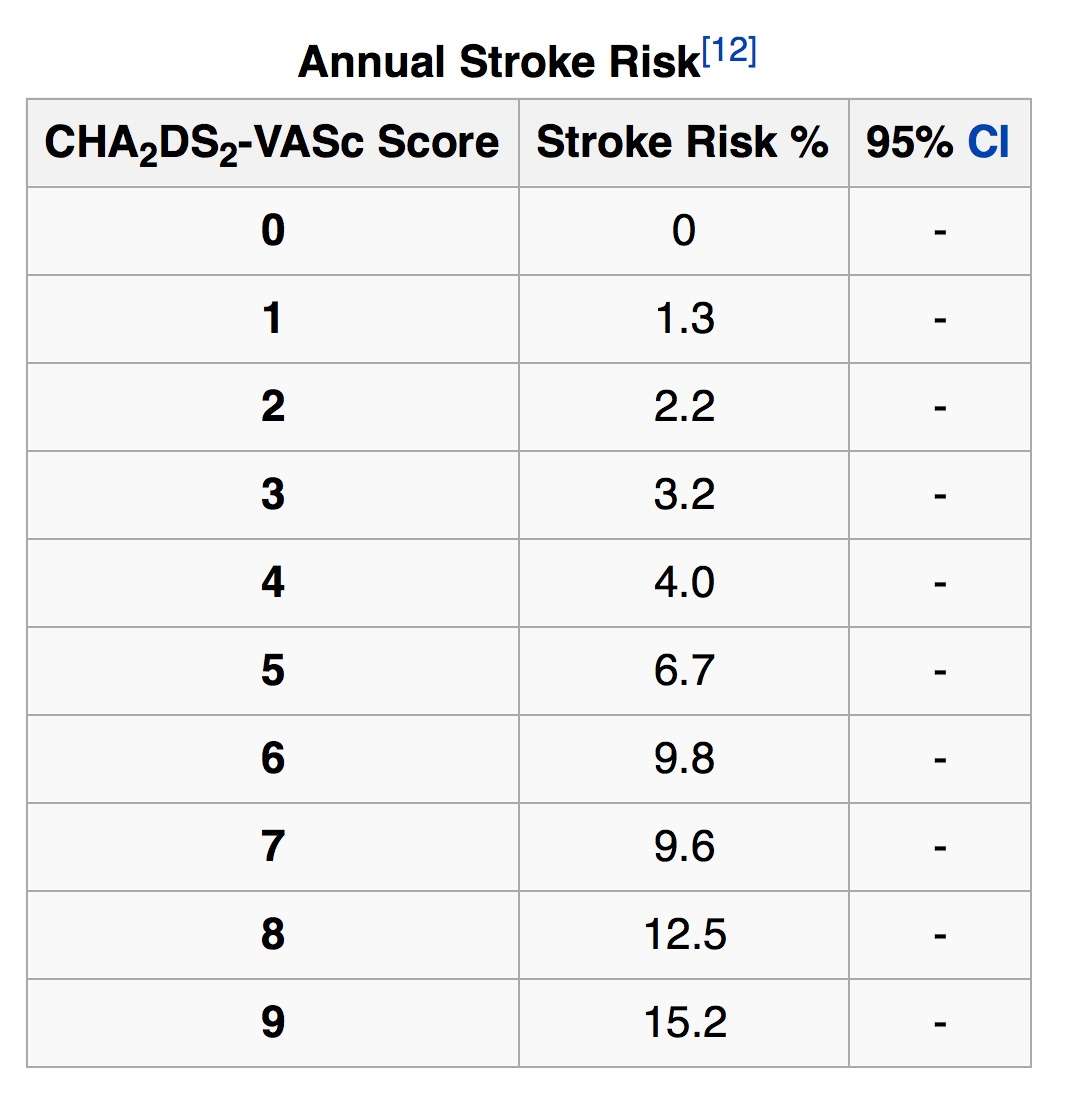 Your risk of stroke is very low if you have zero risk factors; it gets progressively higher as you reach the maximum number of 9.

Treatment with an oral anticoagulant (OAC),  either warfarin, or one of the four novel anticoagulant agents (NOACS), is recommended when score is >/=2 corresponding to a  risk of stroke  above 1-2% per year.

These blood thinners have consistently been shown to lower your risk of stroke or systemic embolization (when a clot from the heart goes somewhere other than the brain) by almost 70%.

The higher the risk, the more the benefit of these blood thinners in preventing stroke.

I’ve been using the CHA2DS2-VASc scale for several years in my afib patients. I try to review the patient’s risk of stroke and their risk of bleeding during every office visit, and decide whether they should be on or off an OAC.

All OACs cause increase bleeding. They don’t discriminate between bad clots that cause strokes and good clots that stop you from bleeding.

If you’re taking one you are more likely to have nose bleeds, bleeding into the intesitnal tract or urine and you will bleed longer when cut and more profusely if in an accident. In lower stroke risk patients, the bleeding risk of OAC of 1% per year may outweigh the benefits conferred by stroke reduction.

I wrote a post entitled “Why Does The TV Tell me Xarelto Is a Bad Drug” which points out that law suits against the makers of the newer OACs are frivolous and that these NOACs are likely more safe and effective than warfarin.

In recent years, four new drugs for reducing strokes in patients with atrial fibrillation which are much less influenced by diet and medications have gained approval from the FDA. These are generally referred to as “novel anticoagulants” reflecting their newness, different effects from warfarin or aspirin, and their blood thinning properties.  The first  (brand name Pradaxa) was released to much excitement and fanfare in October, 2010.  The press release for this approval read as follows:

PRADAXA, an oral direct thrombin inhibitor2 that was discovered and developed by Boehringer Ingelheim, is the first new oral anticoagulant approved in the U.S. in more than 50 years. As demonstrated in the RE-LY® trial, PRADAXA 150mg taken twice daily has been shown to significantly reduce stroke and systemic embolism by 35 percent beyond the reduction achieved with warfarin, the current standard of care for patients with non-valvular atrial fibrillation. PRADAXA 150mg taken twice daily significantly reduced both ischemic and hemorrhagic strokes compared to warfarin

What was very clear from the study with Pradaxa  and stated very clearly in all publications and patient and doctor  information sources was that just like warfarin, patients could have severe bleeding complications, sometimes fatal. Overall serious bleeding complications were about the same (the rate of major bleeding in patients Pradaxa  in the RE-LY trial was 3.1% versus 3.4% in the warfarin group) but Pradaxa had about 50% more bleeding from the gastrointestinal tract and warfarin about 50% more bleeding into the brain.

Another big difference between the novel anticoagulants and warfarin is that we have antidotes (Vitamin K, fresh frozen plasma) that can reverse the anticoagulation state rapidly for warfarin but until recently none for the newer drugs. (There is now available an antidote for Pradaxa).  This information also was made very clear to all doctors prescribing the medications in the package insert and educational talks. Despite this, in the major trials comparing these newer agents to warfarin, the newer agents were as safe or safer than warfarin.

The most feared bleeding complication on all OACs is bleeding into the head (intracranial hemorrhage). The risk of ICH is between 0.2 to 0.4 percent per year on warfarin. Studies show with the NOACs the risk is about half of the risk on warfarin.

Should You Take a NOAC or Warfarin?

Once the decision has been made to start a blood thinner, the next question is whether to take warfarin or a NOAC. Warfarin (brand name Coumadin) has been utilized since the 1950s  and prior to 2010 was  the only drug available for doctors to reduce clot formation in the heart and susbsequent strokes.. Warfarin is only effective and safe within a narrow window and its effects are strongly influenced by Vitamin K in the diet and most medications. Thus, frequent blood testing and adjustment in dosage is needed, and close monitoring of diet and changes in medications. Even with this close monitoring, serious and sometimes fatal bleeding occurs frequently with warfarin.

Here is a patient information sheet on warfarin which gives you an idea of issues you will need to be aware of when taking the drug. (WArfar patient handout)

If you do a Google search on warfarin you will quickly discover that it is used as a rat poison. Scientists isolate the chemical from  sweet clover that was causing cows to bleed and then developed a more potent form that they named warfarin in the 1940s. After developing blood tests that allowed the drug to be used safely  to dissolve clots it was approved for human use in the 1950s.

Warfarin or more potent variations on its chemical structure have been utilized as rat poison since the 1940s.

The rats are consuming much larger quantities of the blood thinner and are clearly not being monitored for blood thinness.

Some despicable sites peddling alternative or natural products such as this “Healthy Habits” site engage in fear-mongering over the warfarin/rat poison connection in order to promote totally unproven products. Healthy Habits indirectly suggests  that Nattokinase : is a safer, more effective natural alternative to warfarin” This remarkable enzyme has the ability to dissolve blood harmful clots involved in heart disease and strokes without upsetting normal healthy clotting.”

Such misinformation is dangerous and could lead to patients stopping a life-saving medication and suffering a stroke.

By the way, in this Xarelto (another NOAC competitor) ad,

Kevin Nealon says he chose Xarelto over warfarin because he wanted to eat salads. This is a common misconception and the makers of Xarelto should be ashamed for promulgating it.

I tell my patients it is fine to eat green, leafy vegetables while taking warfarin. The Vitamin K in the vegetables does influence the effectiveness of warfarin thinning blood but this is why we check the blood test to determine the appropriate dosage of warfarin for you and your personal dietary Vitamin K consumption , be it high or low.

The newer OACs, in contrast to warfarin do not require blood tests for monitoring of their efficacy because their levels are not significantly influenced by changes in diet or most medications.

In head to head studies versus warfarin four of these NOACs have demonstrated at least similar efficacy in preventing stroke and at most similar bleeding risk.

Due to their perceived advantages most new prescriptions for OACs are for NOACs. In contrast to 2014 American afib guidelines which don’t state a preference, the most recent European afib guidelines recommend choosing a NOAC over warfarin when initiating anticoagulant therapy in patients who are eligible for NOACs. (Ineligible patients include those with mitral stenosis, mechanical heart valves and end-stage renal disease.)

The ESC guidelines published in 2016, , make choosing a NOAC over warfarin a IA recommendation. This means there is a consensus that the treatment should be recommended (Class I recommendation) and that there is strong evidence from randomized controlled trials to support it (Level A.)

I have decided to primarily use Eliquis (apixaban) as my NOAC of choice based on my comparison of the different NOAC studies. If a patient’s insurance covers another NOAC better , making it cheaper then  I am happy to switch.

Because these four NOACs are new and brand name they are significantly more expensive than warfarin. Cost varies substantially based on type of insurance coverage and we can only determine how much a patient will pay for any given NOAC based on writing a prescription and having a pharmacy check out the cost.

I have found some patients paying nothing for their NOAC whereas some are paying several hundred dollars monthly. The more NOACs cost, the more likely the patient and I are to choose warfarin.

While waiting to determine if cost is going to be prohibitive I will typically provide the patient with samples of the NOAC chosen. The pharmaceutical companies making these NOACs are clearly making substantial profits off them and they are happy to provide lots of samples to doctors to influence the doctors to utilize their product.

NOACs are being extensively promoted both to physicians and directly to patients. Physicians have to be especially careful to make sure they are presenting a true summary of the relative risks and benefits of warfarin versus NOACs in light of these constant attempts to influence them.

Despite now having four NOACs with similar benefits and ease of use compared to warfarin, the cost of these agents doesn’t seem to have declined significantly from when the first NOAC came on the market. Personally, I would love to see Medicare step in and negotiate significantly lower costs for American senior citizens.

An abstract at the ACC meeting in March of 2017 suggested  a reduction in medical costs with NOACs despite their high costs. This was related to a lower rate of major bleeding complications: Xarelto cost $542 per patient compared with warfarin’s $500, or $42 more. Pradaxa, cost $367 to warfarin’s $452, saving $85.  Eliquis cost  $286 charge against warfarin’s $537 resulting in $251 in savings. Data were from from a study of U.S. Medicare patient records.

Aspirin May Not  Prevent Stroke In Afib

Many patients consider aspirin to be  a “blood thinner” that has some benefit in preventing clots and strokes in patients with afib. However,  aspirin is not considered a blood thinner or anticoagulant and is more properly  termed an anti-platelet agent.

I used to consider aspirin at doses of 120 to 200 mg daily provided some protection against stroke in afib and put afib patients on aspirin who were low risk for stroke or would not or could not take OACs.

More and more, however, experts are reaching the conclusion that the substantial bleeding complications from aspirin usage outweigh its very slight benefit in stroke prevention.

The most recent ESC guidelines, in fact, list aspirin therapy for stroke prevention in atrial fibrillation as IIIA. That means that overall it is felt to be harmful (III) with a high level of evidence (A.)

Bleeding risks for aspirin are similar to warfarin and Eliquis. Thus, patients should not consider aspirin as a safer alternative to prevent stroke in afib.

Finally, do not take any “natural” supplement that has been promoted as a blood thinner. These are neither safe nor effective. Remember that it took years of scientific investigation and careful testing in animals then humans before warfarin (the agent in sweet clover that caused cows to bleed ) was transformed into a safe and effective anticoagulant.