Until the last year or so when patients asked me what they could do to help their atrial fibrillation (AF) I would tell them to avoid excessive alcohol consumption and take their medications as prescribed.

I had noted previously that the majority of my patient’s with AF were obese and sedentary (although there are definitely many AF patients who exercise regularly, eat a great diet and stay at their ideal body weight0 but data was lacking to suggest cause and effect.

In addition, I had noted that when I looked at the left atrium of the vast majority of patients with AF using an imaging tool called trans-esophageal echocardiography they had evidence for fatty infiltration into the area between the atria (atrial septum)  and the wall of the left atrium.

I strongly suspected based on these observations that somehow the fat infiltrating into the walls of the left atrium was triggering AF but I had no way of proving it.  Isolated observations like these can only generate hypotheses on causality.

Science has many different approaches to solidifying or proving hypotheses and one such approach is to induce a disease in an animal similar to humans and make detailed analyses of the cause and consequences.

Australian researchers writing in JACC in July present their observations on the electrical, physiologic and structural changes that result when sheep get fat.

How Do You Make Sheep Fat?

Apparently you just let them eat as many pellets made of energy-dense soybean oil (2.2%) and molasses–fortified grain as they want.

After 36 more weeks of obesity the sheep were studied extensively. All sheep underwent “electrophysiological and electroanatomic mapping; hemodynamic and imaging assessment (echocardiography and dual-energy x-ray absorptiometry); and histology and molecular evaluation”.

The fat sheep developed AF and had multiple abnormalities in the left atrium, the source of AF, that made them more likely to develop atrial fibrillation. 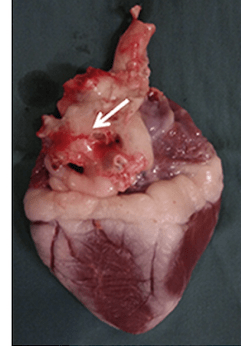 In fact, the investigators believe it was fat collecting around the heart and specifically around the posterior left atrium that was triggering all these changes.

The pictures to the left show a heart from one of the fat sheep. The arrow points to the extensive amount of fat collecting posterior to the left atrium.

When the posterior left atrial wall was viewed microscopically, fat cells could be seen infiltrating between the muscle cells in the fat sheep (right, blue arrow) but not in the lean sheep. 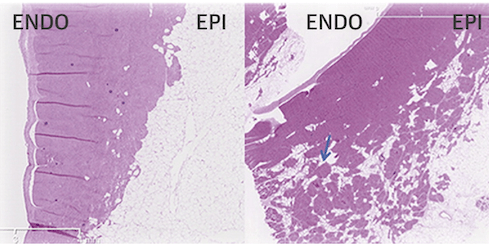 In the fat sheep, fat cells (adipocytes)  were enlarged and infiltrated between the muscle cells of the left atrium, presumably disrupting the normal electrical activity and contributing to the development of atrial fibrillation.

More Reasons To Stay At Your Ideal Body Weight!

If you were previously unmotivated to avoid obesity perhaps this will motivate you.

Think about fat cells gathering around your heart and pouring their evil humours into the tissues of your left atrium and making it more likely that you will develop AF. With AF comes increase risk of stroke, heart failure and death.