The skeptical cardiologist is fascinated by the cardiac drug digoxin and the plant from which it is derived, the foxglove.

I wrote about “foxglove equipoise” in a previous post, touching on the contributions of William Withering in the 1700s, to understanding the toxicity and therapeutic benefits of the foxglove, and more recent concerns that digoxin increases mortality in patients with heart failure.

At the American College of Cardiology Scientific Sessions in Washington, D.C. yesterday, a paper showing higher mortality for patients on digoxin may be the final nail in the foxglove coffin.

The investigators used data from the ARISTOTLE study of apixiban versus warfarin for their analysis.

They looked at mortality in patients taking or not taking digoxin at baseline, using a Cox model with propensity weighting, which included demographic features as well as biomarkers and digoxin levels at baseline. Major findings:

-In patients already taking digoxin, mortality was not higher in digoxin users, however, the risk of death was related to dig levels: for every 0.5 ng/ml increase in dig level, the risk of death rose by 19 percent and if dig level was >1.2 ng/ml the death rate increased by 56 percent.

–Patients not taking digoxin before the trial who began taking it 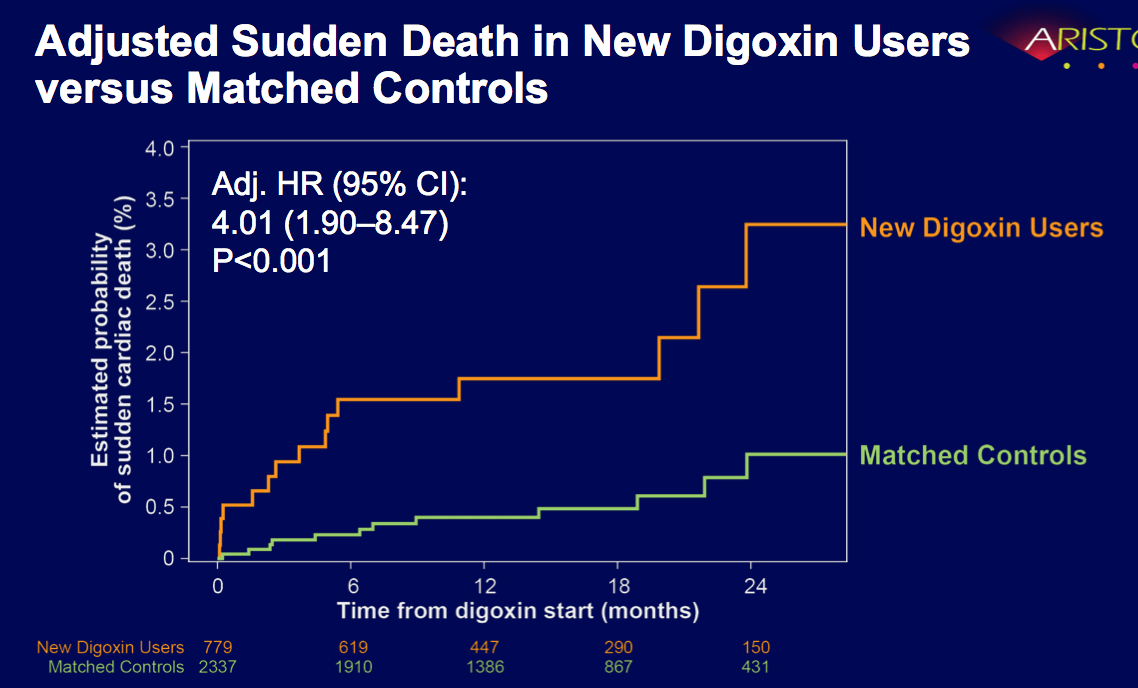 over the course of the study had a 78 percent increase in the risk of death from any cause and a four-fold increased risk of sudden death after starting digoxin use.  Most sudden deaths occurred within six months after digoxin was started.

–Risk of death with initiation of digoxin was increased in patients with and without heart failure.

The use of foxglove to treat dropsy is a fascinating and instructive chapter in the history of medicine.

This study added to prior systematic reviews suggests that it is time to end the use of digitalis and close the chapter.

William Withering might turn over in his grave but at least we won’t be sending afib patients to join him prematurely!