The skeptical cardiologist has been evaluating the Kardia Band from AliveCor which allows one to record single lead medical grade ECGS on your Apple Watch. What follows is my initial experience with setting up the device and using it to make recordings.

After ordering my Kardia Band for Apple Watch on 11/30  from AliveCor the device appeared on my door step 2 days later on a Saturday giving me most of a Sunday to evaluate it.

What’s In The Box 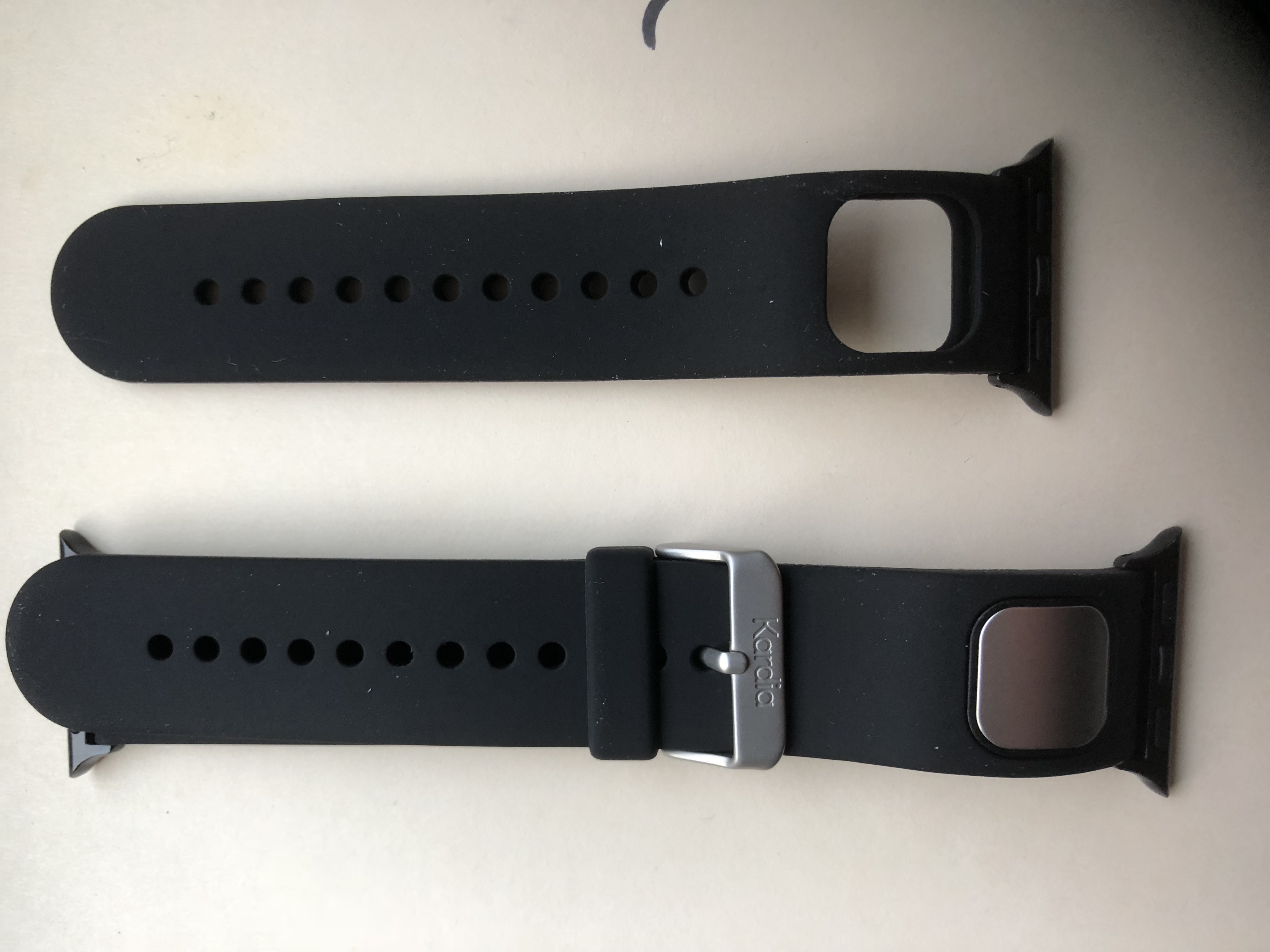 After replacing my current band with the Kardia band (requires pushing the button just below the band and sliding the old band out then sliding the new one in) I was ready to go. 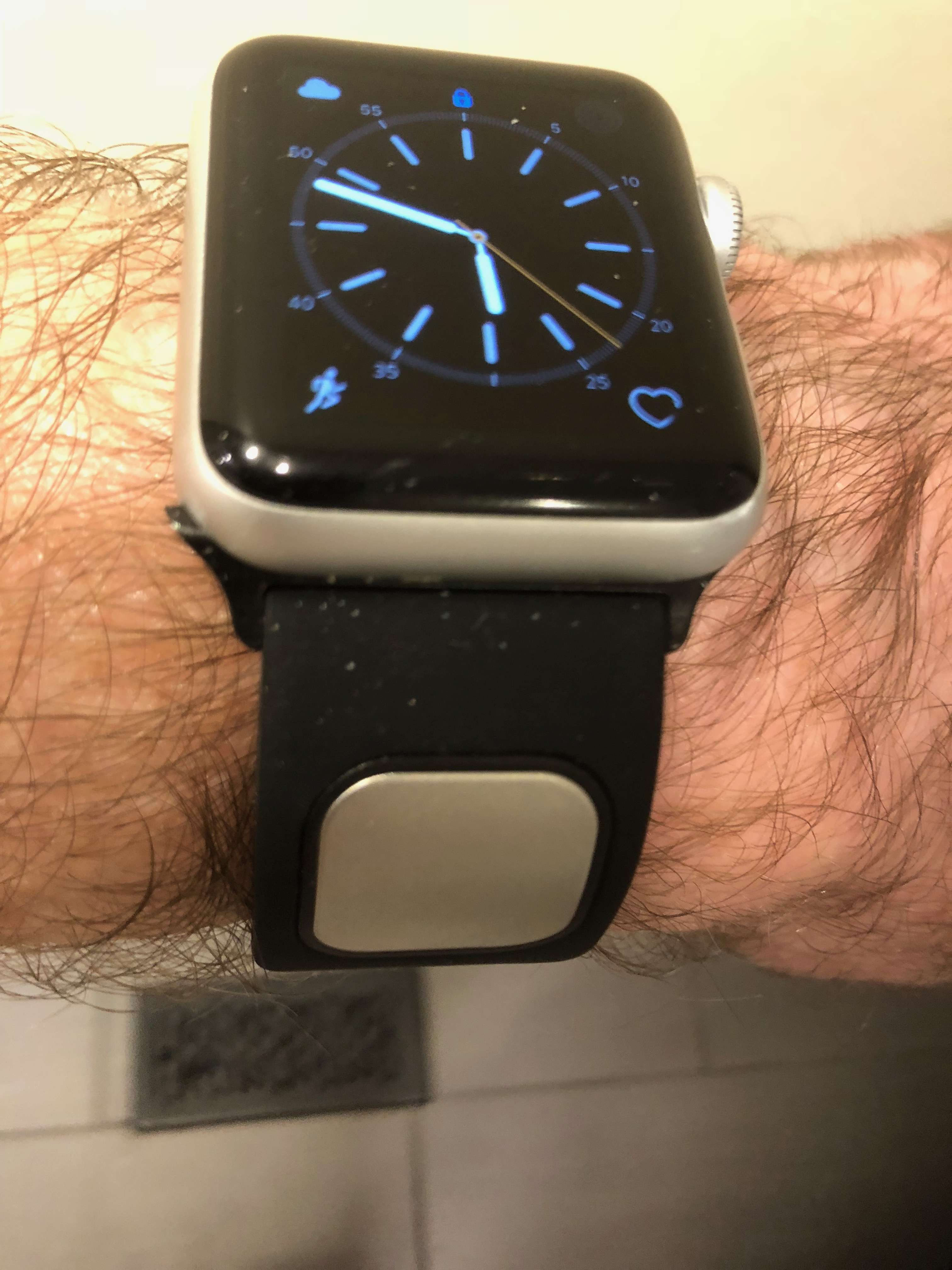 The Eternal  fiancée did not complain about the appearance of the band so I’m taking that to mean it passes the sufficiently stylish test. She did inquire as to different colors but it appears AliveCor only has one style and one color to choose from right now.

I have had problems with rashes developing with Apple’s rubbery band and switched to a different one but thus far the Kardia band is not causing wrist irritation.

I didn’t encounter any directions in the box or online so I clicked on the Kardia app on the watch and the following distressing message appeared. 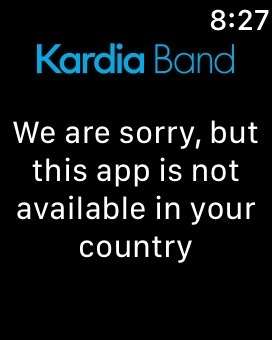 Prior to 11/30 Kardia Band only worked in certain countries in Europe so I suspected my AliveCor app needed to be updated.

I redownloaded the Kardia app from the Apple App Store , deleted it off my Watch and reinstalled it.

However, I was a little puzzled as I was not aware that setting up Smart Rhythm was a requirement to utilize the ECG recording aspect of Kardia Band. Since I have been granted a grandfathered Premium membership by AliveCor I knew that I would have access to Smart Rhythm and went through the process of entering my name and email into the Kardia app to get this started.

Alas, when the Watch Kardia app was accessed after this I continued to get the same screen. Clicking on “need help” revealed the following message:

Bluetooth was clearly on and several attempts to restart both the watch and the iPhone app did not advance the situation.

I sent out pleas for assistance to AliveCor.

At this point the Eternal Fiancee had awoken and we went to Sardella for a delightful brunch . I had this marvelous item:

Later on that day I returned to my Kardia Band iPhone and deinstalled, reinstalled , reloaded and restarted everything.
The First Recording
At this point it worked and I was able to obtain my first recording by pushing the record ECG button and holding my thumb on the sensor for 30 seconds. 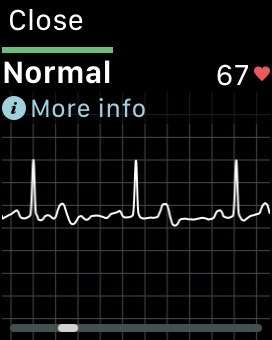 I’ve made lots of recordings since then and they are good quality and have accurately recognized that I am in normal sinus rhythm.
The Smart Rhythm component has also been working. Here is a screen shot of today’s graph. 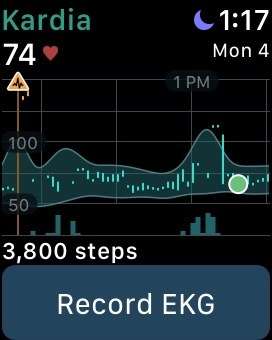 You’l notice that the Smart Rhythm AI gave me a warning sometime in the morning (which I missed) as it felt my rhythm was abnormal. I missed making the recording but am certain that I was not in afib.
Comparison of the Kardia Band recording (on the right) versus the separate Kardia device recording (on left)  shows that they are very similar in terms of the voltage or height of the p waves, QRS complexes and T waves. 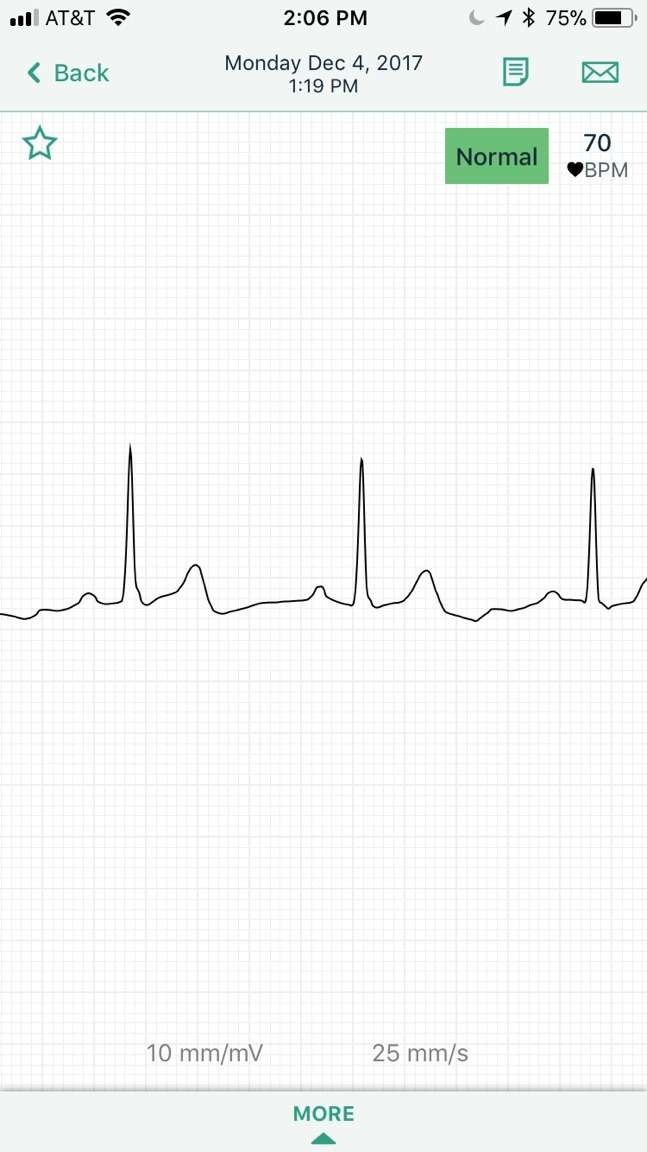 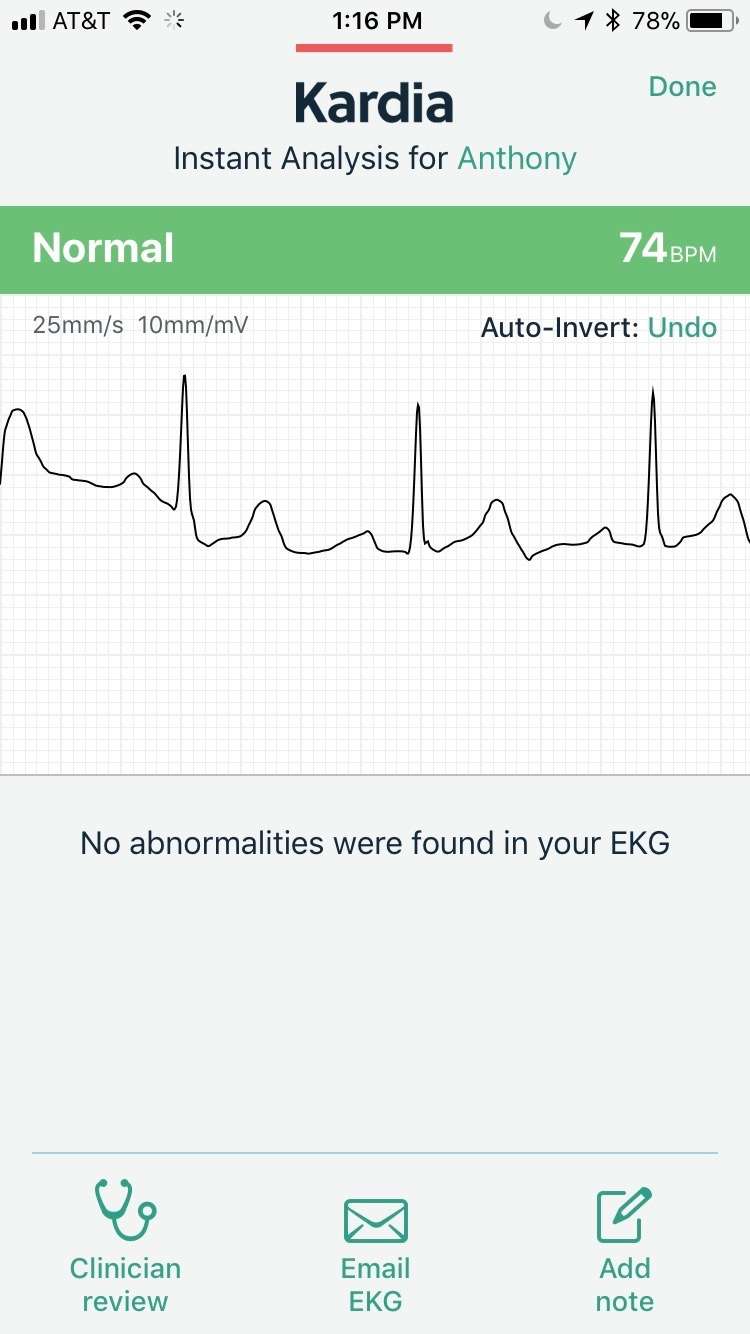 I felt a palpitation earlier and was able to quickly activate the Kardia Watch app and make a recording which revealed a PVC. 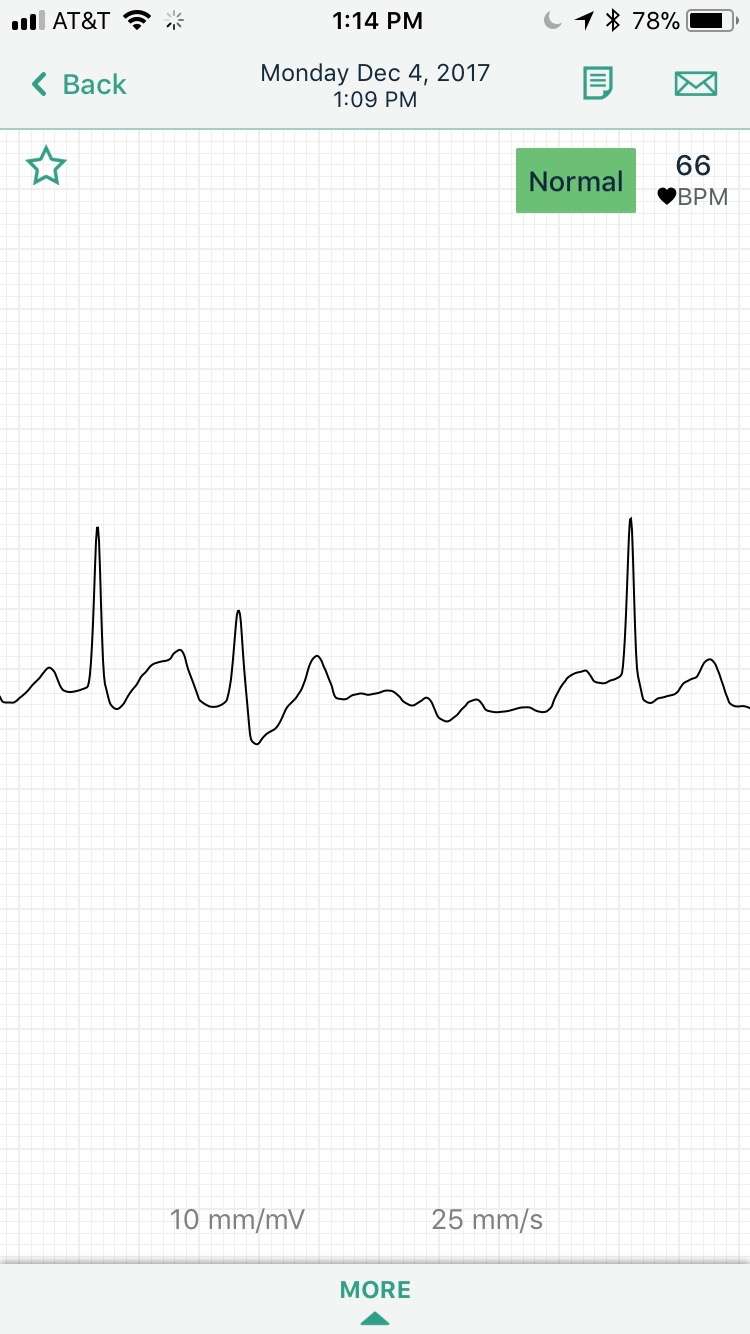 In summary, after some difficulty getting the app to work I am very pleased with the ease of recording, the quality of the recording and the overall performance of Kardia Band. The difficulties I encountered might reflect an early adoption issue which may already be resolved. Please give me feedback on how the device set up worked for you.
I’ll be testing this out on patients with atrial fibrillation and report on how it works in various situations in future posts.
After more experience with the Smart Rhythm monitoring system which I think could be a fantastic breakthrough in personal health monitoring I’ll give a detailed analysis of that feature.
Everwatchingly Yours,
-ACP