When your heart stops beating synchronously and goes into atrial fibrillation all sorts of bad things begin happening. The normal mechanisms for controlling how fast your heart is beating are lost and in most individuals the rate accelerates inappropriately. The strength of the atria’s pumping force and the normal precise synchronization of the upper and lower chambers  deteriorates.

You might logically conclude then, that all efforts should be focused on converting the rhythm back to normal,  for in the normal rhythm the heart can go back to beating regularly, efficiently  and synchronously the way nature intended.

AF is abnormal. the thinking goes, and normality is the state in which we were born and to which we should seek to return.

It would be hard to find a cardiologist who doesn’t believe that patients are better off in NSR than AF but the more difficult question and more clinically relevant question is “if your heart has gone into atrial fibrillation will you do better in the long run with a strategy of trying to convert the rhythm back to normal and keep it there (which involves medications (anti-arrhythmic drugs) and/or procedures) versus just controlling the heart rate and letting the atria fibrillate to their heart’s content.

Unfortunately, studies that have compared the  strategy of maintaining NSR (rhythm control) with leaving the heart to fibrillate have not shown a benefit in preventing stroke or death in the patients randomized to rhythm control

To quote the 2016 European Society of Cardiology  guidelines on AF

Although many clinicians believe that maintaining sinus rhythm can improve outcomes in AF patients, all trials that have compared rhythm control and rate control to rate control alone (with appropriate anticoagulation) have resulted in neutral outcomes.

(see references for this below)

However, findings from these studies can only be applied to the population studied, thus younger patients without structural heart disease and patients over age 80, who combined constitute up to 50% of the AF group were not represented in these comparison studies.

The elderly are more dependent on normal atrial function for maintenance of cardiac output and are more likely to have issues with anticoagulation, thus they may benefit more from maintenance of NSR than the young.

In addition, much of the morbidity and mortality in these trials was related to failure to anticoagulate patients who were in NSR. The stroke risk persists in this group, we have learned, because they may not recognize when AF occurs. Therefore, most authorities recommend lifelong  anticoagulation for those who have had  AF and have significant risk factors for stroke whether or not they have documented episodes of AF.

These and other  reasons for the  failure of the so-called rhythm strategy have long been debated but most experts blame it on the absence of a safe and effective method for maintaining NSR: the drugs  and procedures (catheter ablations) we have used create their own problems and don’t always work.

Why Then, Do I And Most Cardiologists Recommend Efforts To Maintain Normal Sinus Rhythm?

This is a question almost no AF patients ask. It is quite easy for a treating cardiologist to invoke the “normality” of NSR and the dangers of AF and most AF patients require no more justification. But they really should demand a compelling rationale.

The ESC guideline summarizes this as follows

However, there are important limitations to letting symptoms guide our approach.

For one, symptoms are in the mind of the patient and cannot be measured objectively. For another, the symptoms a patient experience could be from something other than AF.

You might think that we can objectively verify that symptoms are due to atrial fibrillation if they resolve after converting the patient to sinus rhythm but symptoms can be heavily influenced by the patient’s perception that something has been done to fix them. This placebo effect is well-known from clinical trials of medications but may be even more prominent after procedures.

It is not uncommon for me to perform a cardioversion on a patient , see the patient in follow-up in AF and have them tell me how tremendous they have felt since the cardioversion.

The difficulty of objective symptom measurement is one of many factors contributing to  a tremendous variability in how cardiologists approach rhythm control  for AF.

Some cardiologists have concluded that maintaining SR is rarely worth the trouble and they add rate controlling medications and anticoagulants and see the patient back once a year. Let’s call these NSR Nihilists

On the other end of the spectrum, cardiologists who are true believers in the value of NSR run their patients through multiple anti-arrhythmic drugs, cardioversions and ablations to achieve that goal. When this is done excessively such cardiologists become NSR Overtreaters.

I put myself somewhere in between the Nihilists and the Overtreaters and consider myself a rational NSR advocate or enthusiast but one who has a very clear understanding of the dangers of over treatment and who recognizes that many patients have done well for decades in permanent AF.

Recording and observation of symptoms depends heavily  on the recorder and observer: the Nihilists are loath to find symptoms attributable to AF whereas the Overtreater may see any and all symptoms as due to AF.

Like other areas in life and medicine we have to look closely at hidden motivations and conflicts of interest to fully understand variations in behavior.

If one were to analyze the financial benefit from testing and procedures to treating cardiologists I have no doubt that the Overtreaters are getting a lot more than the Nihilists.

In an ideal world, cardiologists would not benefit more financially based on what procedures they recommend be performed on their patients but this is not the reality.

Reasons For NSR Maintenance Beyond Symptoms

A second group of patients, I think, benefits the most from maintaining sinus rhythm (rhythm control strategy): patients who develop heart failure when they go into AF.

These patients may not even know they are in AF because they don’t feel the typical symptoms initially.  After a few days or weeks or months of being in afib silently, however, they develop shortness of breath, weakness and leg  swelling – classic signs of heart failure.

The 2014 ACC guidelines for management of AF admit the lack of randomized trials supporting maintenance of NSR but cite several factors that would “favor attempts at rhythm control” with which I generally agree. These are:

If, after discussion of the options, a patient decides they prefer no attempts at maintaining NSR,  I try to make them aware that AF begets AF. The longer they stay in AF the larger and more diseased their atria become and the harder it is to stay in NSR with any techniques. In other words, this not a decision that can easily be reversed a few years from now if they start feeling poorly.

The ACC guidelines put it this way:

AF progresses from paroxysmal to persistent in many patients and subsequently results in electrical and structural remodeling that becomes irreversible with time . For this reason, acceptance of AF as permanent in a patient may render future rhythm-control therapies less effective. This may be more relevant for a younger patient who wishes to remain a candidate for future developments in rhythm-control therapies. Early intervention with a rhythm-control strategy to prevent progression of AF may be beneficial.

Many of the factors cited for leaning toward NSR maintenance are, of course, soft and vague.  One doctor’s young patient is another doctor’s old patient. The definition of adequate rate control is unclear. What qualifies as an acute illness?

My Approach to Maintenance of NSR

I favor a more aggressive approach to maintenance of NSR. I justify this because in my experience with meticulous attention to detail and with close monitoring of patients on anti-arrhythmic drugs I have observed that most patients do better in the long run with NSR Than AF.

Over thirty years of managing patients with AF and comparing those who are left to permanently be in AF versus those who maintain NSR  I see substantial differences. Let me cite two case examples to buttress my argument.

A 75-year-old man with permanent atrial fibrillation came under my care after his cardiologist retired. He had been in AF with rate well controlled and on anticoagulation since 2008. He is active without any symptoms.

He had an echocardiogram in 2008 with the new onset of AF and it showed a normal sized left and right atria and no valvular problems.

Over 10 years,  however, the size of both his atria have dramatically increased. His current echo shows severe enlargement of his left atrium (LA volume index=72 cm3/M2) and right atrium (RA area=26 cm2). He has developed significant leakage (regurgitation)  from both his mitral and tricuspid valves. 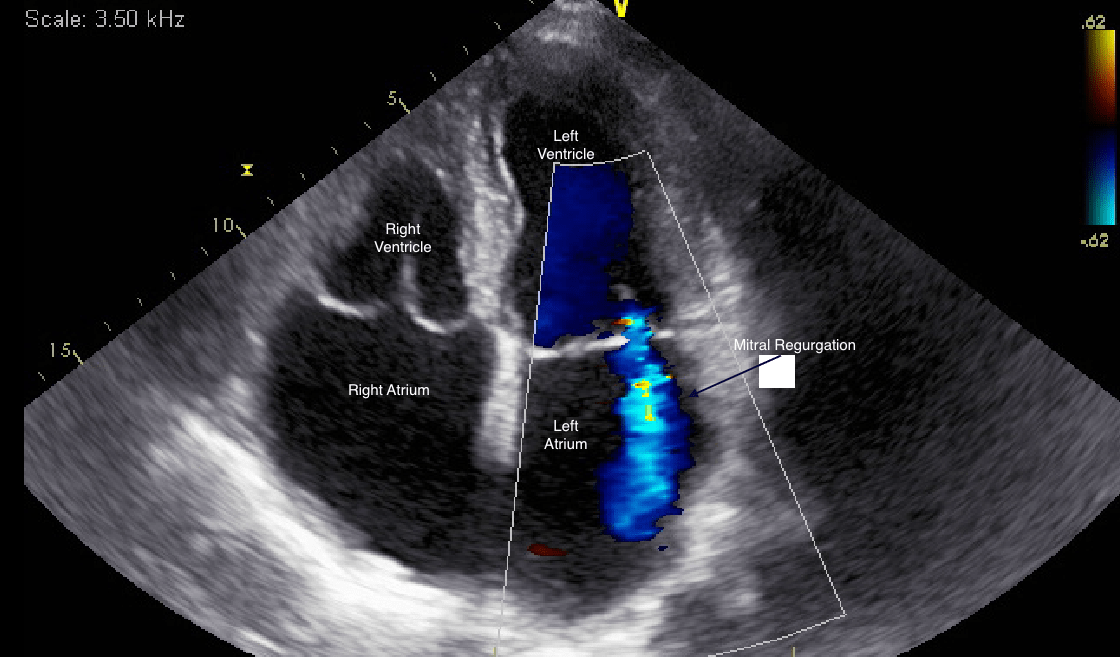 This is the norm for most patients who have been in AF for a long time.

The larger the left atrium gets over time, the more dysfunctional it becomes and the more likely clots are to form in the LA appendage. Although anticoagulation dramatically reduces the formation of LA clots, patients frequently have to come off anticoagulation for surgeries, spine injections, bleeding and other issues.

Would you rather have a left atrium that has been maintained in NSR or one that is massively enlarged and dysfunctional if you have to stop your anticoagulation?

The other exam example is of a 74 year old man whose AF was detected at the time of a colonoscopy. When I saw him he was without symptoms with normal lab and cardiac testing. We attempted one cardioversion without anti-arrhythmic drugs and within two weeks he reverted back AF. He elected not to start any anti-arrhythmic drugs and repeat the cardioversion and was doing fine when I saw him 6 months later.

However, shortly after that visit he ended up in severe heart failure with severe left ventricular  dysfunction and severe mitral regurgitation at an outside hospital. This time he agreed with a more aggressive approach to maintenance of SR and after prolonged amiodarone loading and a repeat cardioversion he has maintained SR for 6 months. The function of his left ventricle has improved to near normal (LVEF has increased to 49%) and there is no significant leakage from his mitral valve.

Whereas, most patients who feel fine in AF and elect to stay in it do well there is an unpredictable but significant number who despite adequate rate control develop cardiomyopathy and valvular regurgitation with resulting heart failure.

Yes, I’m convinced that patients can safely and effectively be maintained in SR with medical therapy and the occasional cardioversion.

I try not to fall in the camp of Overtreaters but consider myself a Rational Normal Sinus Rhythm Enthusiast and Advocate.

In my practice when atrial fibrillation reaches a point that requires addition of an anti-arrhythmic medication  I predominantly utilize two such drugs: amiodarone and flecainide.

Patients with structurally  normal hearts do well with flecainide and those with structural heart disease (heart failure, left ventricular hypertrophy, or significant coronary artery disease ) do well with amiodarone when they are monitored closely by a cardiologist with extensive experience using the drugs.

I’ll talk about each of these options  as well as cardiac ablation in detail in subsequent posts.

Six studies showing no difference in outcomes between rhythm and rate control strategies.