My first patient this morning, a delightful tech-savvy septagenarian with persistent atrial fibrillation told me she had been monitoring her rhythm for the last few days using her Apple Watch 4’s built in ECG device.

Previously she had been using what I consider the Gold Standard for personal ECG monitoring- AliveCor’s Kardia Mobile ECG   and I monitored her recordings through our Kardia Pro connection.

I had been eagerly awaiting Apple’s roll out since I purchased the AW4 in September (see here) and between patients this morning I down-loaded and installed the required iPhone and Watch upgrades and began making AW4 recordings.

Through the day I tried the AW4 and the Kardia on patients in my office.

The AW4 ECG recording process is very easy and straightforward. Upon opening the watch app you are prompted to open the health app on your iPhone to allow connection to the Watch ECG information. After this, to initiate a recording simply open the Watch ECG app and hold your finger on the crown.

Immediately a red ECG tracing begins along with a 30 second countdown.

Helpful advice to pass the time appears below the timer:

“Try Not to move your arms.”

When finished you will see what I and my patient (who mostly stays in sinus rhythm with the aid of flecainide) saw-a declaration of normality: 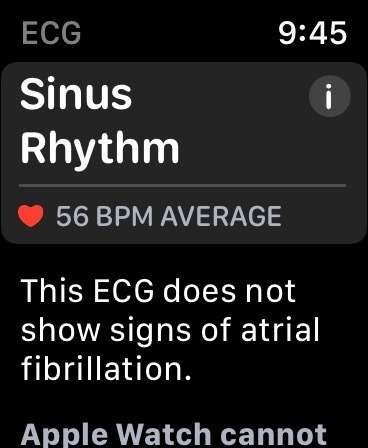 Later in the day I had a few patients with permanent  atrial fibrillation put on my watch. 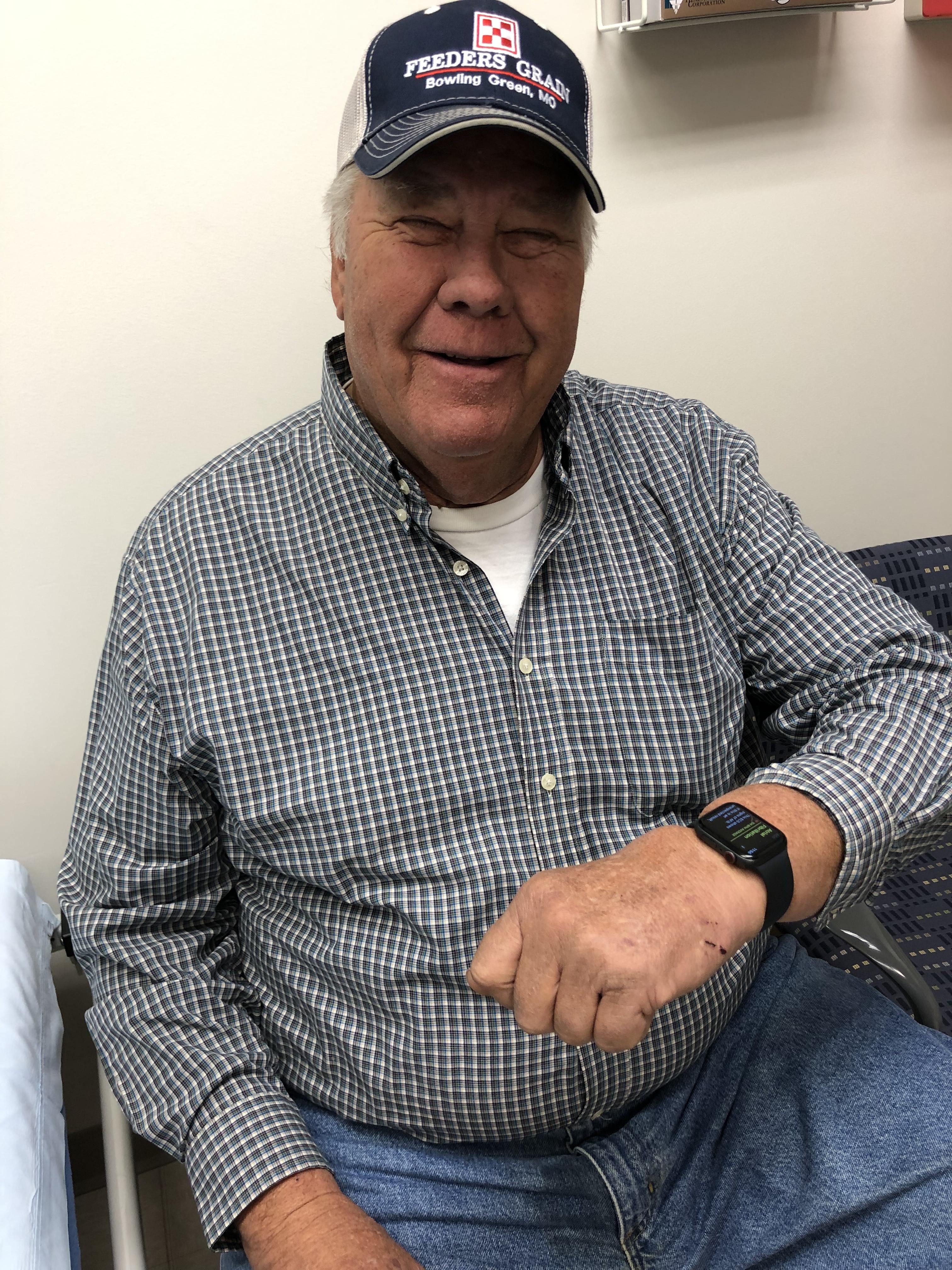 This seventy-something farmer from Bowling Green, Missouri was easily able to make a very good ECG recording with minimal instruction 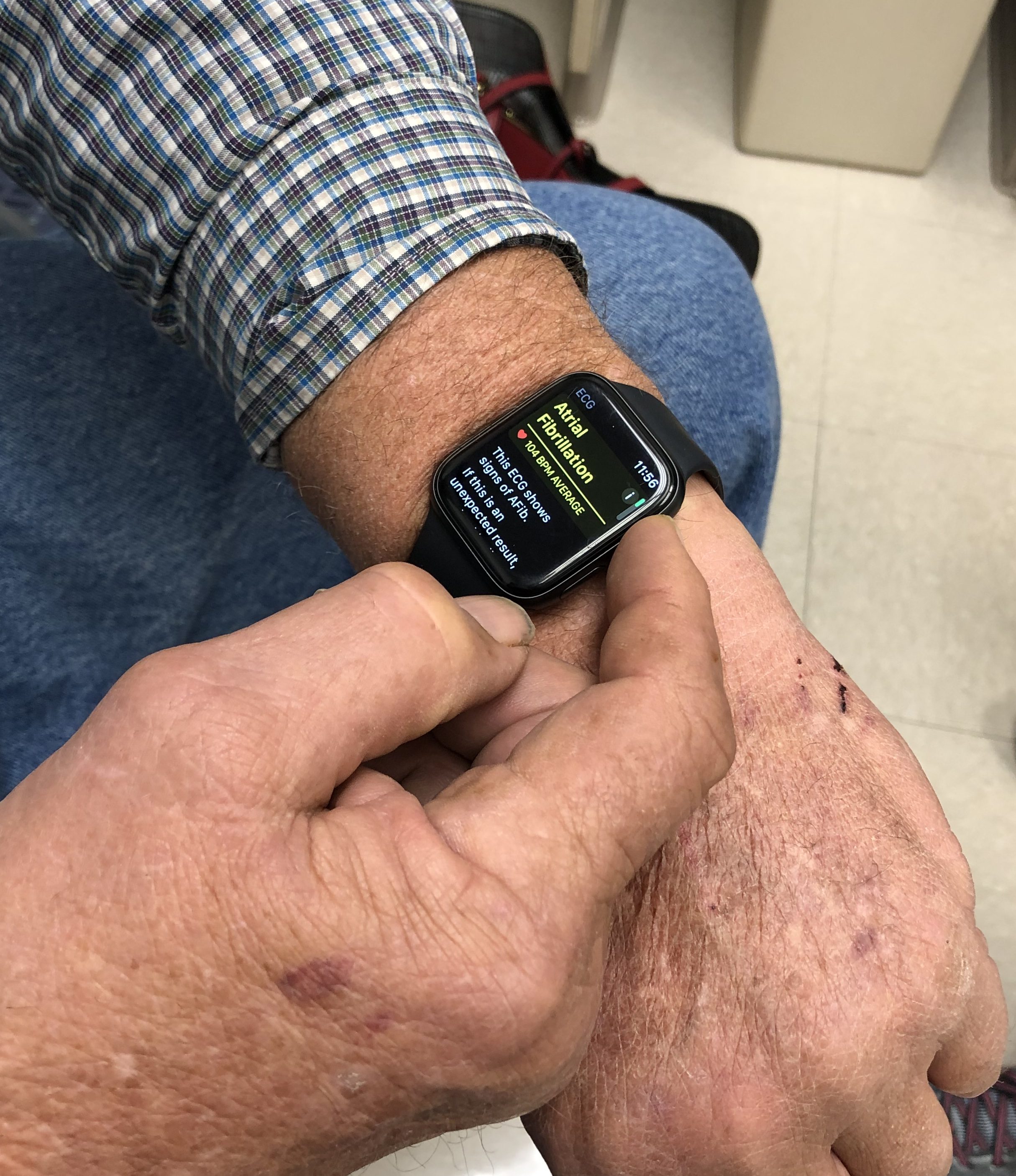 The AW4 nailed the diagnosis as atrial fibrillation.

After you’ve made an AW4 recording you can view the PDF of the ECG in the Health app on your iPhone where all of your ECGs are stored. The PDF can be exported to email (to your doctor) or other apps. 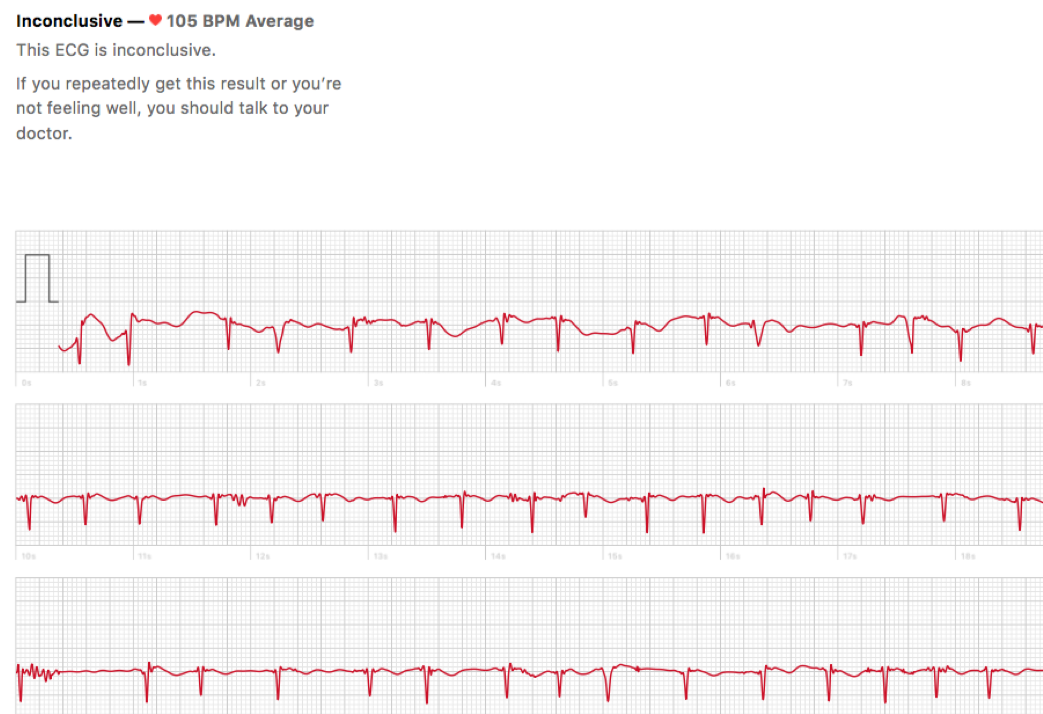 The Kardia device and algorithm despite a fairly noisy tracing was able to correctly diagnose atrial fibrillation in this same patient. 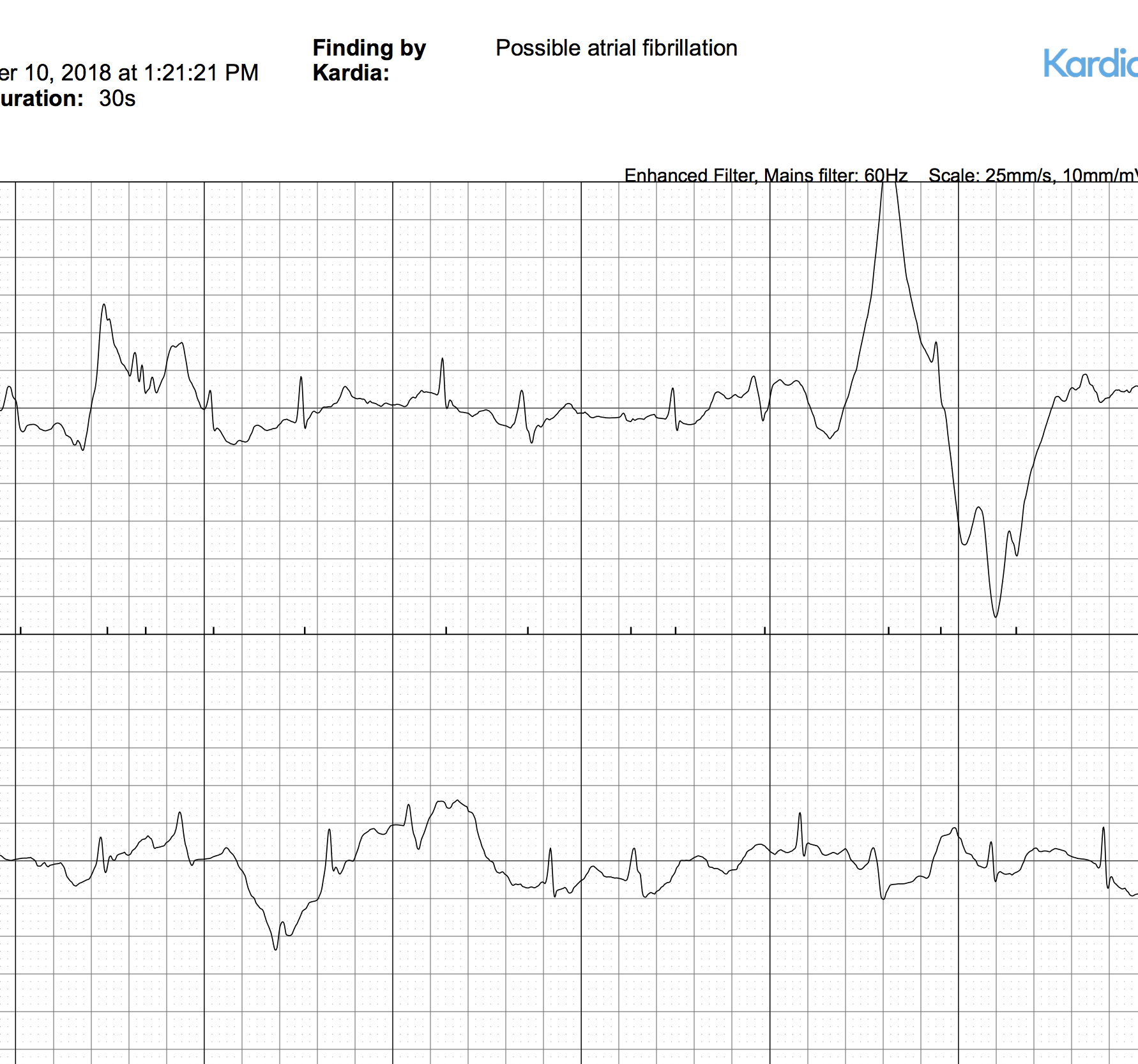 I put the AW4 on Sandy, our outstanding echo tech at Winghaven who is known to have a left bundle branch block but remains in normal rhythm and obtained this inconclusive report . 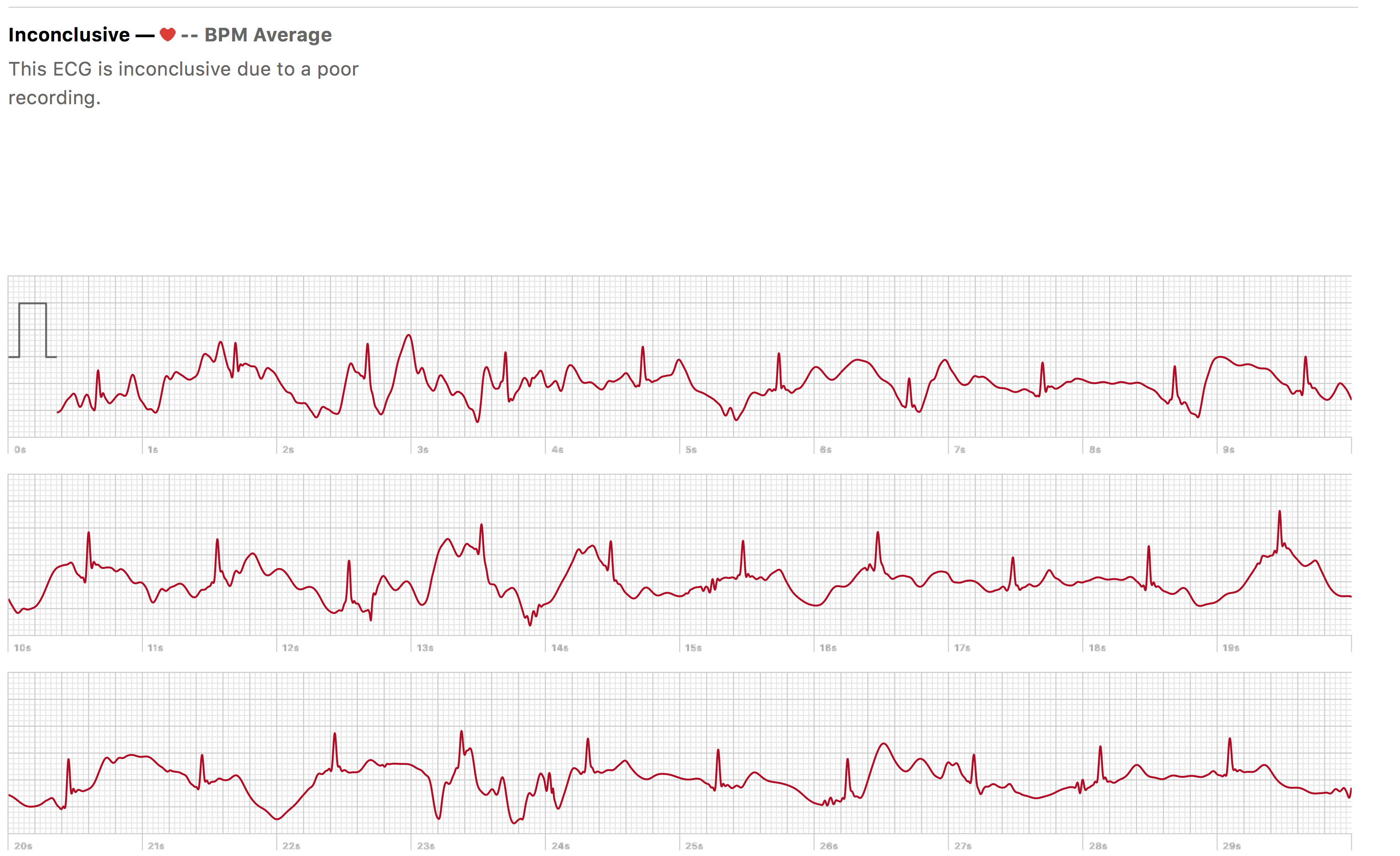 Kardia, on the other hand got the diagnosis correctly: 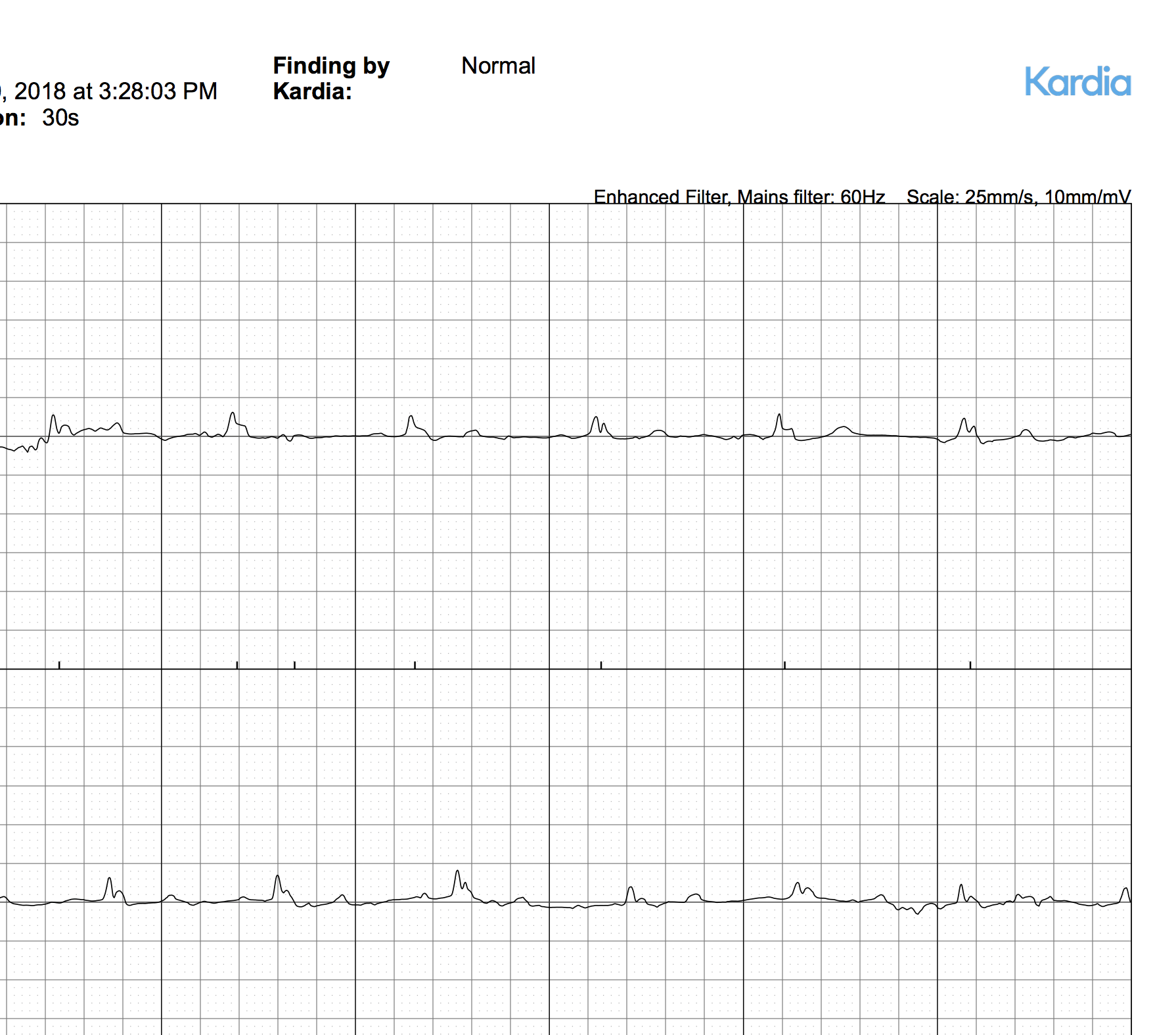 One Bizarre Tracing by the AW4

In another patient , an 87 year old lady with a totally normal recording by the Kardia device, the AW4 yielded a bizarre tracing which resembled ventricular tachycardia: 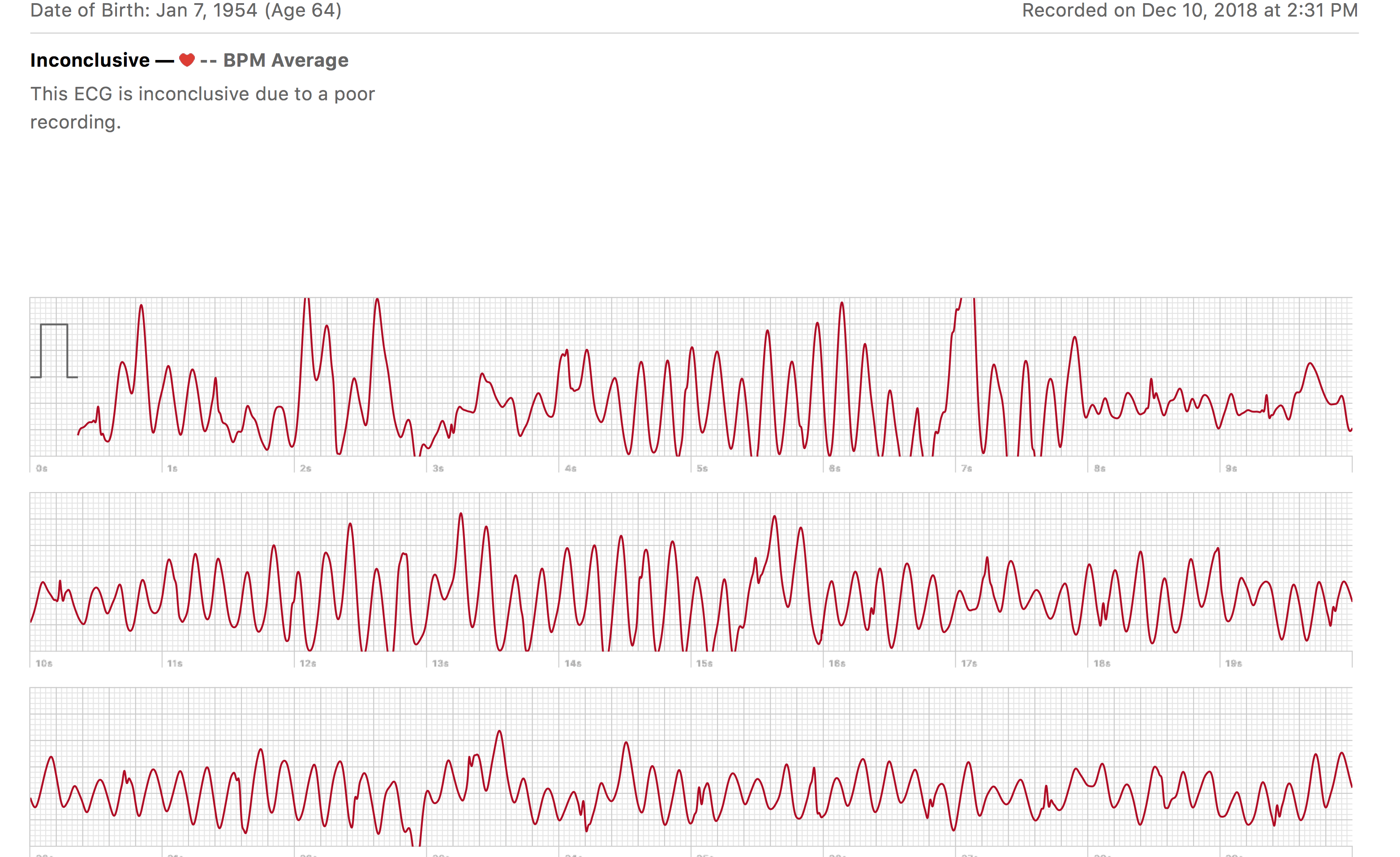 Despite adjustments to her finger position and watch position, I could not obtain a reasonble tracing with the AW4.

The Kardia tracing is fine, no artifact whatsoever. 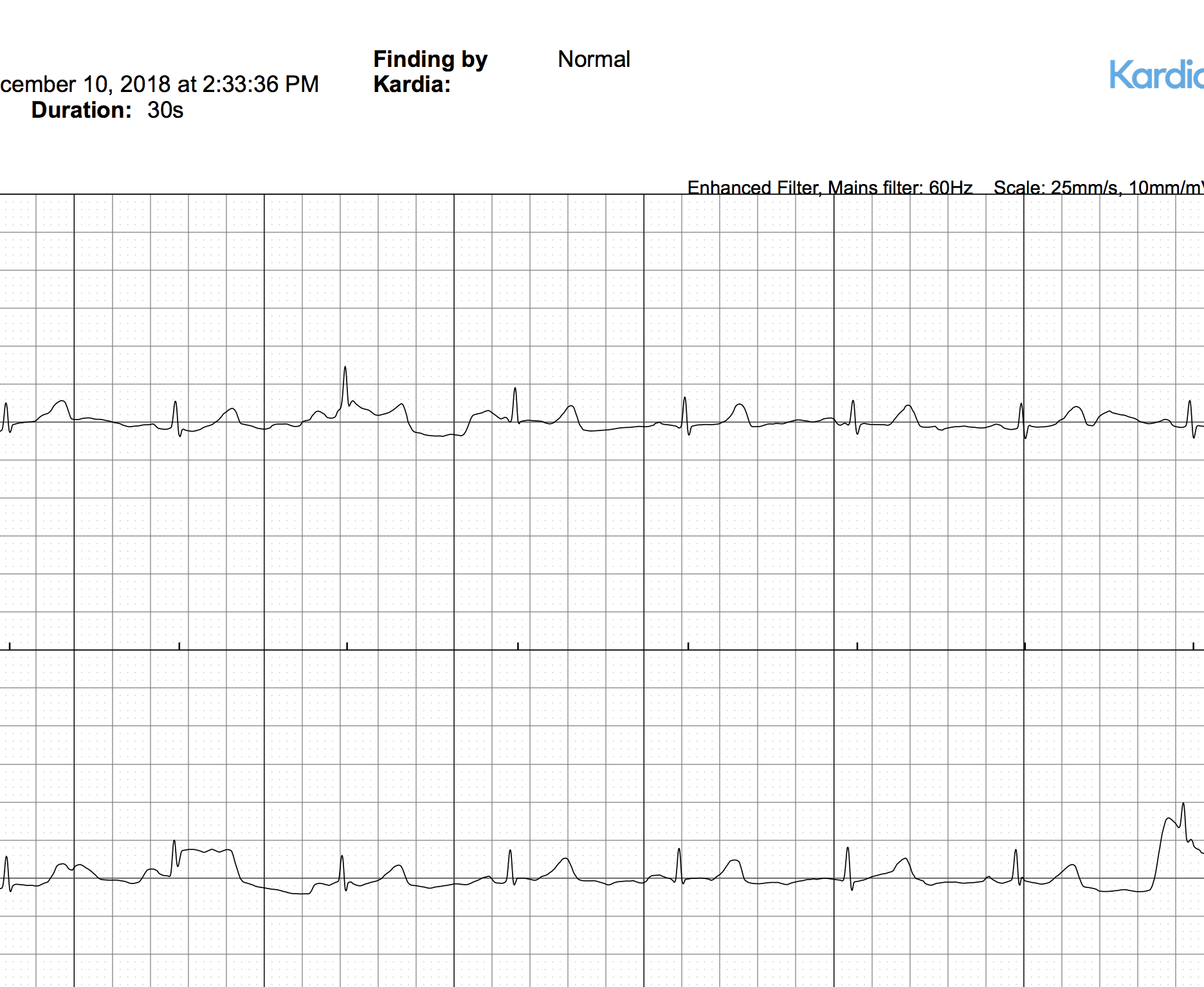 What can we conclude after today’s adventures with the Apple Watch ECG?

This is an amazingly easy, convenient and straightforward method for recording a single channel ECG.

I love the idea that I can record an ECG whereverI am with minimal fuss. Since I wear my AW4 almost all the time I don’t have to think about bringing a device with me (although for a while I had the Kardia attached to iPhone case that ultimately became cumbersome.)

Based on my limited sample size today, however, the AW4 has a high rate of being uncertain about diagnoses. Only 2/3 cases of permanent atrial fibrillation were identified (compared to 3/3 for the Kardia) and only 4/6 cases of sinus rhythm were identified.

If those numbers hold up with larger numbers, the AW4 is inferior to the Kardia ECG device.

I’d rather see the AW4 declare inconclusive than to declare atrial fibrillation when it’s not present but this lack of certainty detracts from its value.

What caused the bizarre artifact and inconclusive AW4 tracing in my patient is unclear. If anybody has an answer, let me know.

We definitely need more data and more studies on the overall sensitivity and specificity of the AW4 and hopefully these will be rapidly forthcoming.

For most of my patients the advantages of the AW4 (assuming they don’t already have one) will be outweighed by its much greater cost and we will continue to primarily utilize the Kardia device which will also allow me to view all of their recordings instantaneously in the cloud.

Note. The original version of this post had the wrong ECG tracing for the first “inconclusive” AW4 recording of a patient with permanent atrial fibrillation. H/t to discerning reader Vignesh for pointing this out months after the initial posting.