The skeptical cardiologist recently received this email from a reader:

With the new Apple Watch that’s out now, people have suggested my husband (who had a heart attack at 36) should get it since it could detect a heart attack. But I keep remembering what you said – that these devices can’t detect heart attacks and that Afib isn’t related to a heart attack most of the time – is that still the case? I don’t really know how to explain to people that it can’t do this, since absolutely everyone believes it does.

The answer is a resounding and unequivocal NO!

If we are using the term heart attack to mean what doctors call a myocardial infarction (MI) there should be no expectation that any wearable or consumer ECG product can reliably diagnose a heart attack.

The Apple Watch even in its latest incarnation and with the ECG feature and with rhythm monitoring activated is incapable of detecting a myocardial infarction.

Similarly, although the AliveCor Kardia ECG monitor is superb at diagnosing rhythm abnormalities it is not capable of detecting an MI

To make this even clearer note that when you record an ECG on the Apple Watch it intermittently flashes the following warning: 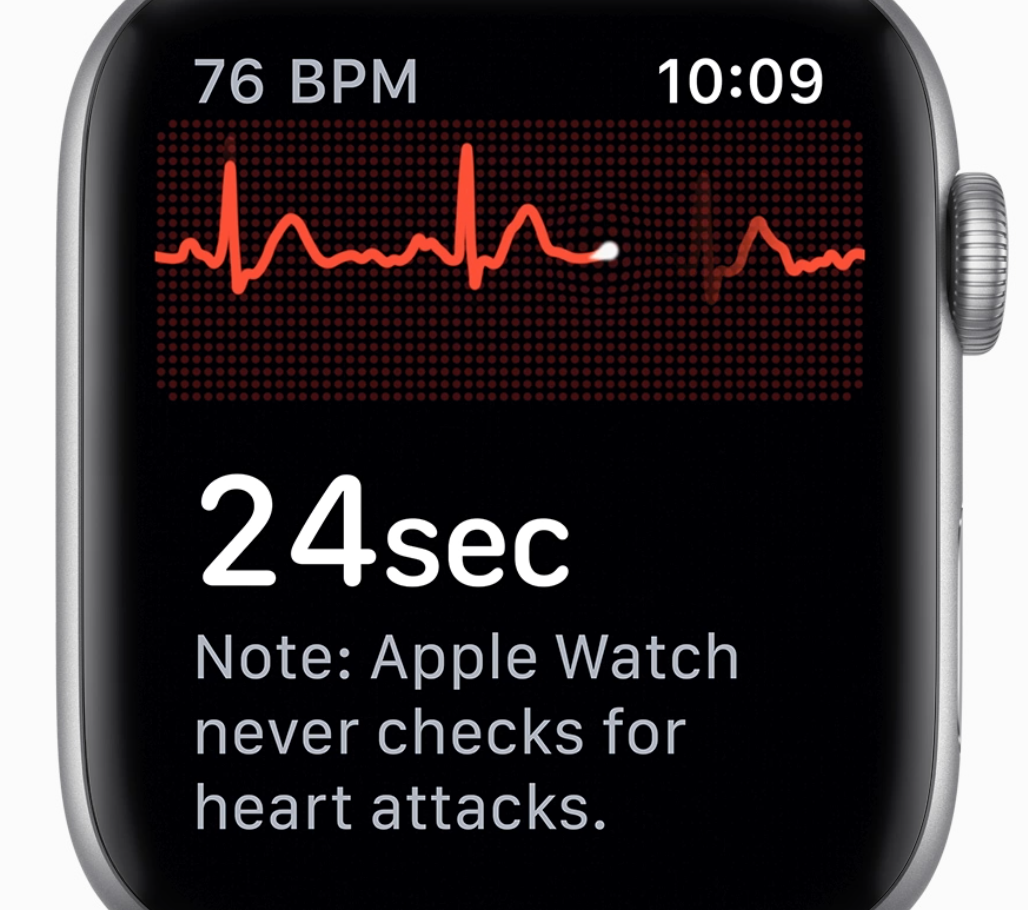 How did such this idea take root in the consciousness of so many Americans?

In reality,  the man received an alarm that his resting heart rate was high at night. Apparently he also was experiencing chest pain and went to an ER where a cardiac enzyme was elevated.  Subsequently he underwent testing that revealed advanced coronary artery disease and he had a bypass operation.
Even if we assume all the details of this story are accurate it is absolutely not a case of Apple Watch diagnosing an MI.
A high resting heart rate is not neccessarily an indicator of an MI and most MIs are not characterized by high heart rates.  We have had the technology with wearables to monitor resting heart rate for some time and no one has ever suggested this can be used to detect MI.
The rate of false alarms is so high and the rate of failure to diagnose MI so low that this is a useless measure and should not provide any patient reassurance.
The writer of this story and the editors at 9-5 Mac should be ashamed of this misinformation.
Several other news sources have needlessly muddied the water on this question including Healthline and Fox News:

The Fox News article entitled “Could The Apple Watch Series 4 save you from a heart attack” quotes a non-physician who suggests that AW can detect early signs of a heart attack:

In clear cut cases the Apple Watch could make the difference between life and death,” says Roger Kay, president of Endpoint Technologies Associates. Because you wear the Apple Watch at all times, it can detect an early sign of a stroke or a heart attack, and that early indication is critical, he says.

And the Healthline article on the new Apple Watch also incorrectly implies it can diagnose MI:

The device, which was unveiled last week, has an electrocardiogram (ECG) app that can detect often overlooked heart abnormalities that could lead to a heart attack.

And if you are felled by a heart problem, the fall detector built into the Apple Watch Series 4 could alert medical professionals that you need help

Fox News and Healthline should modify their published articles to correct the misinformation they have previously provided.